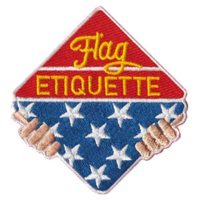 This 2″ iron-on embroidered patch is part of our patch program®.

Fun Fact: The first American flag was approved by the Continental Congress on June 14, 1777. There have been 27 official versions so far with stars added each time states joined the Union.

Take the time to teach your scout troop or youth group the proper flag etiquette.

Suggestions for how Scouts of all levels can earn the Flag Etiquette Patch:

Learn about flag ceremonies and flag retirement ceremonies with our patch programs: