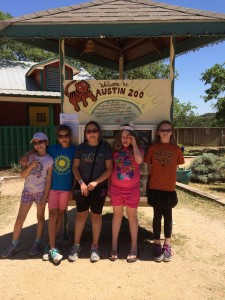 My Juniors love animals. So I knew that earning the Animal Habitats badge would be a priority for them. As luck would have it, another Junior troop in our service unit planned to do an overnight event at a zoo in a nearby city. Great! Less work for me!

Or so I thought. As it turned out, the weekend they planned to go would not work for my troop due to some scheduling conflicts. Undaunted, and still hoping to avoid some of the planning and execution for this badge, I reached out to our local zoo. The Austin Zoo & Animal Sanctuary is small, but focuses on rescuing animals, making it even more interesting for the girls.

I e-mailed the zoo on a weekend, expecting to get a response eventually. To my surprise, Executive Director Patti Clark responded within a few hours. As it turned out, the Zoo was interested in working with Girl Scouts and was seeking ways to do so. Shortly thereafter, the Education Director Audrey Morgan sent me a note. I met with both Patti and Morgan, discussing the mission of the Girl Scouts and how animals fit into that mission. We discussed the concept of badges as learning tools, focusing not on the steps but on the objectives and the ultimate goal of equipping the girls for service. We also discussed the ways the Zoo might work with other program levels, such as the Three Cheers for Animals Daisy Journey, the Brownie Pets Badge, and service projects. Audrey and Patti were excited and promised to put together a program for my Juniors. 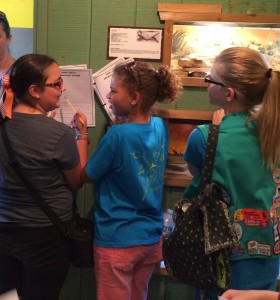 Audrey and her team put together a great program! Before the event, the girls were asked to observe domestic animals and take pictures of a pet; they would later use this to discuss the differences and similarities between wild and domestic animals. On a warm May afternoon, Troop 434, along with a troop from another service unit, came to the Zoo to pilot this badge workshop. It didn’t hurt that there had been a charity run at the Zoo earlier in the day and sponsors were giving away free burgers and snacks.

Audrey began the workshop by engaging the girls in a discussion about what an animal habitat is and what all animals require. The girls learned about the need for shelter, food, clean water, and more. This would become the basis of the day’s discussions and learning, and Audrey did a great job laying the groundwork.

The girls made bags filled with hay and sprayed with scent – toys for the wolves. Then the girls went to the wolf enclosure to observe feeding time while Audrey explained wolf habits and habitat needs. The girls even got to see the wolves playing with their newly made toys! 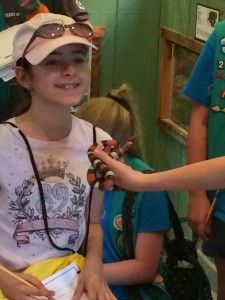 Next, the girls moved to the reptile house to discuss dessert habitats and adaptations. Zoo staff brought out a tarantula, a lizard, and a snake. Our brave girls pet these animals! Girls then observed some of the artificial habitats the Zoo created for the various dessert animals. Next, it was time for the girls to make some habitats. The girls painted plastic bins that would become lizard homes, covering them with sand as well. The girls also stocked terrariums with rocks, sand, and artificial plants. When the girls return to the zoo, they will be able to find the homes they made for the reptiles.

Finally, Audrey led the girls through a discussion about sources of pollution in the Earth’s waterways, such as rivers and oceans. The girls learned ways that pollution – especially plastic waste – affects marine life. And, the girls came up with ways to keep the animals safe and to preserve habitats.

All in all, the girls learned a lot, had fun, and served their community. They built their courage, confidence, and character and learned ways to make the world a better place.

Benjamin Kanten is the father of a second year Junior and co-leads Troop 434, made up of of seven girls. With his co-leader, he is entering his fourth year of leading the troop. He enjoys seeing the girls learn and grow, becoming leaders as they discover their talents and interests. He lives with his wife, daughter, and son in Bastrop, Texas.
Pin
Share
Tweet