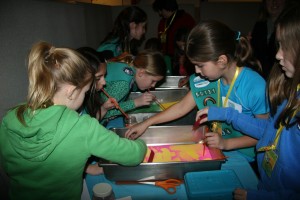 For our 4th annual World Thinking Day there was 3 troops from our school learning about 4 different countries.

We always did a few service projects This year will be The Solar Cooker Project (In the Past: Kids Against Hunger, Loving Hugs, Blue to Green, Food Bank Donations, Nothing but Nets)

We also had a International Dinner Buffet where parents made food from their ethnic background. Another great idea is to have around the world ice cream Sundae Bar with different topping that are special for different countries.

During event Connecticut Troop 50145 learned about Tunisia and the problem of desertification.  There task was to blow sand and set up barriers to show how planting of trees, brush, and man made structures can slow the blowing sand that causes deserts to grow. What is desertification? The process by which fertile land becomes desert, typically as a result of drought, deforestation, or inappropriate agriculture. 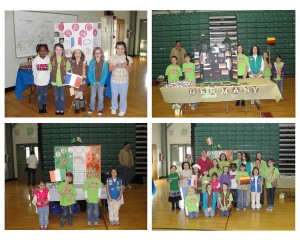 Last year, I had 40 girls in my troop. I had 15 Juniors, 15 Brownies, and 10 Daisies. We decided to do 3 different countries for Thinking Day, and made it into a competition. The girls had so much fun getting everything ready and then showing off all their hard work! Juniors chose Germany, Brownies chose France (since one of my Brownies had just gone to France on vacation), and Daisies did Ireland. As you can see from the photos, not all of my troop showed up – but the ones who did had a blast! 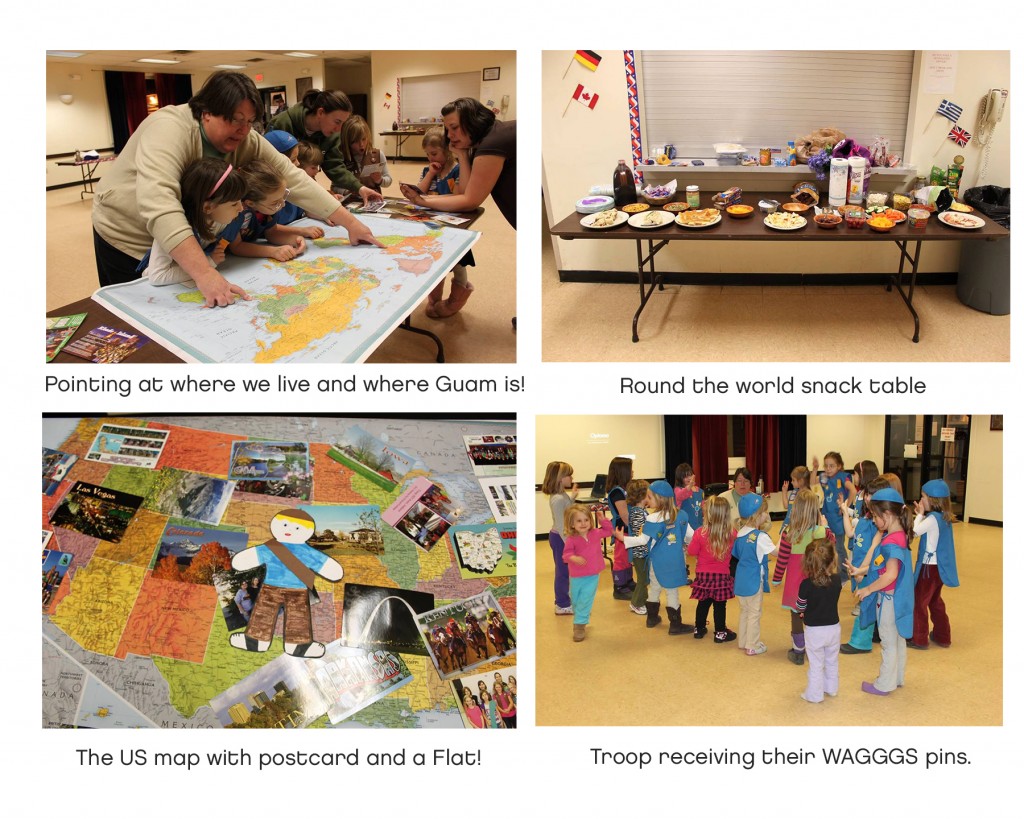 Last year was my first as a Girl Scout leader! I had 20 Daisy Girl Scouts & we had a WTD Fun Night, instead of our usual after-school meeting. I wasn’t sure exactly what troops do to “celebrate”, so I made ours a general, world celebration. I had spent 3 months before participating in a Girl Scout Postcard Exchange. As an opening activity, I set out 2 huge maps (1 USA, 1 World) and the 75-ish postcards mailed to our Troop from all corners of the globe! The girls & their family members all had a great time looking at all the different cards, reading the friendly messages, and locating where they were from. The girls decided to play a game (something they felt girls everywhere liked to do), then took a break by trying different foods from our round-the-world snack table. The Daisies found out we all eat many of the same foods and some presented in a new way! Seated with snacks, everyone watched a Powerpoint I made on what WAGGGS is all about (the World Centers, what their area Guides & Scout uniforms look like, & the meaning of the design on the WAGGGS pin). Afterward, the Daisies all received their WAGGGS pins! We wrapped things up with a huge friendship circle, which included our families. 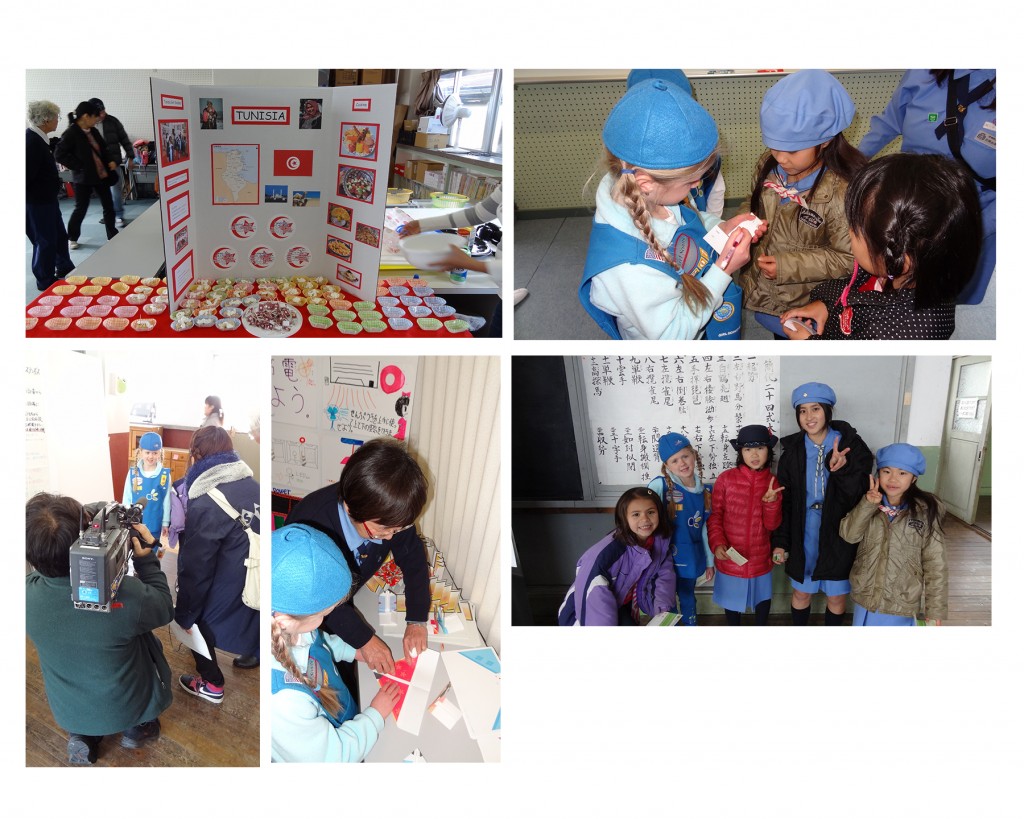 Last year, we lived in Sasebo, Japan.  We have recently moved to Honolulu, Hawaii.  Japanese Girl Guides in Sasebo, Japan hosted the military Girl Scouts of Sasebo Navy Base for Thinking Day.  They did an entire day program based on saving energy and the environment, learning about Japanese culture, and also focusing the WAGGGS troops of that year.  Our troop chose to represent Tunisia.  My daughter, Jordan, was particularly popular, because she is fairly fluent in Japanese.  She was even interviewed for local television. 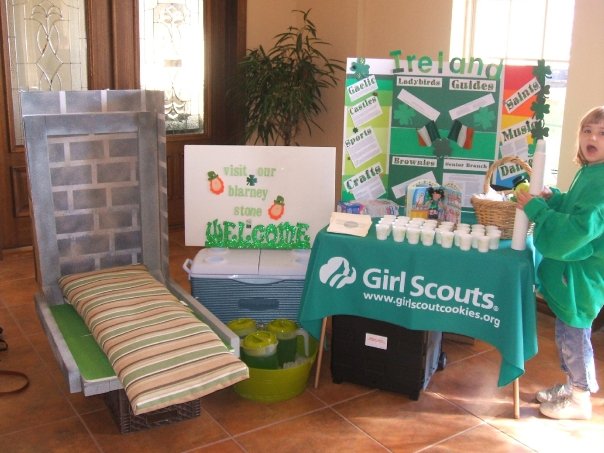 We gave out certificates with the “gift of gab” to those who kissed our Blarney Stone.

The Tour of Italy

As a seasoned troop Thinking Day gets harder every year to make interesting, when we did it as brownies 2 years ago we pulled out all the stops! As a service unit we choose one country per troop and that year we had Italy! Prior to the event night we researched on the web, went to the library to check out books, and created our display board as a troop! During the event we decided to serve “real Italian food” and got to try some out prior. This was an experience to remember! They got to try authentic italian meats, olives, sauces, and pasta! It was AMAZING! We called our Thinking Day experience that year “The Tour of Italy” 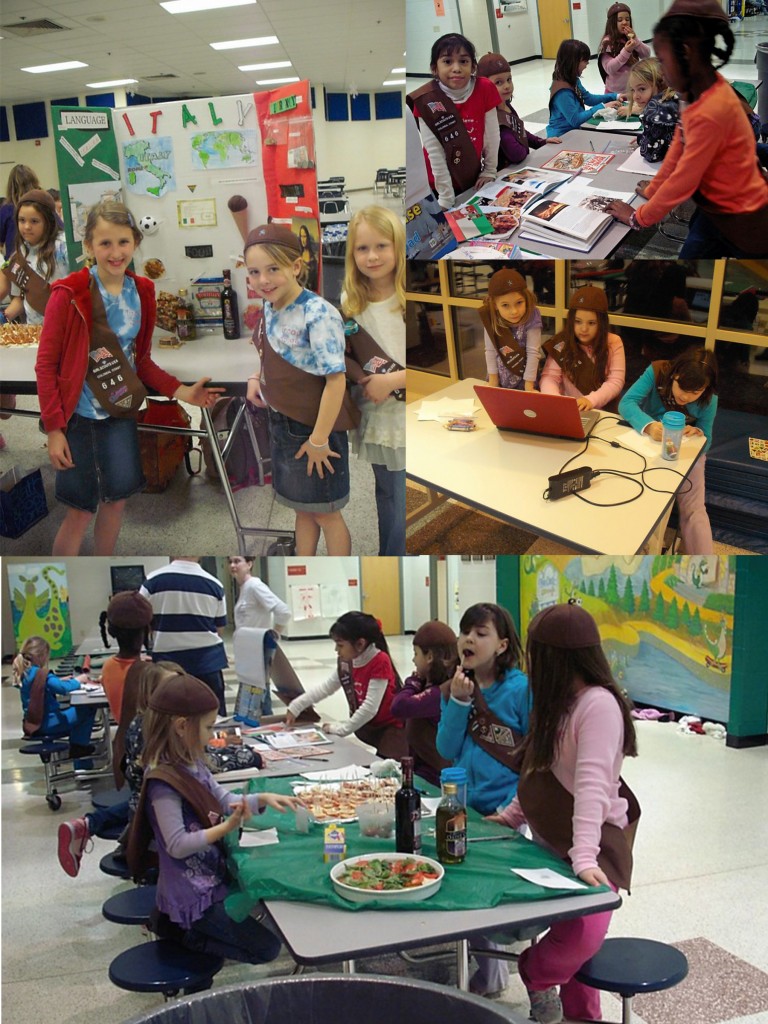 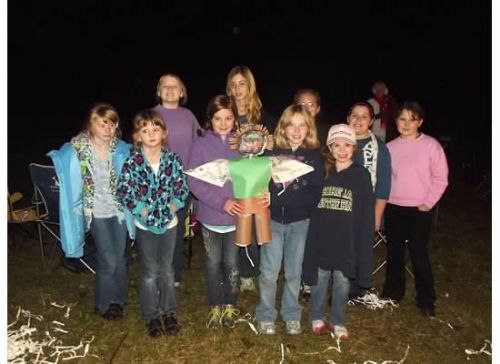 Girl Scout Troop 30197 held their Thinking Day celebration early in order to celebrate their country of choice’s Bonfire Night.  England has celebrated Bonfire Night (or Guy Fawkes Day) on the 5th of November since 1606, the year after Guy Fawkes was stopped from blowing up Parliament and killing King James I. Fireworks and bonfires are lit and a “Guy” is burned on the bonfire as a way to remember Guy Fawkes and all that happened.

Girls also had the opportunity to taste candy treats sent to them by Mary’s and Jenna’s England pen pals, Georgina and Emily-May Lowe. The girls used Cadbury Fabulous Fingers (biscuit fingers wrapped in layers of milk and white chocolate) topped with Hundreds and Thousands sprinkles to make edible sparklers. They also got to try Honeycomb Cinder Toffee and Treacle Toffees. 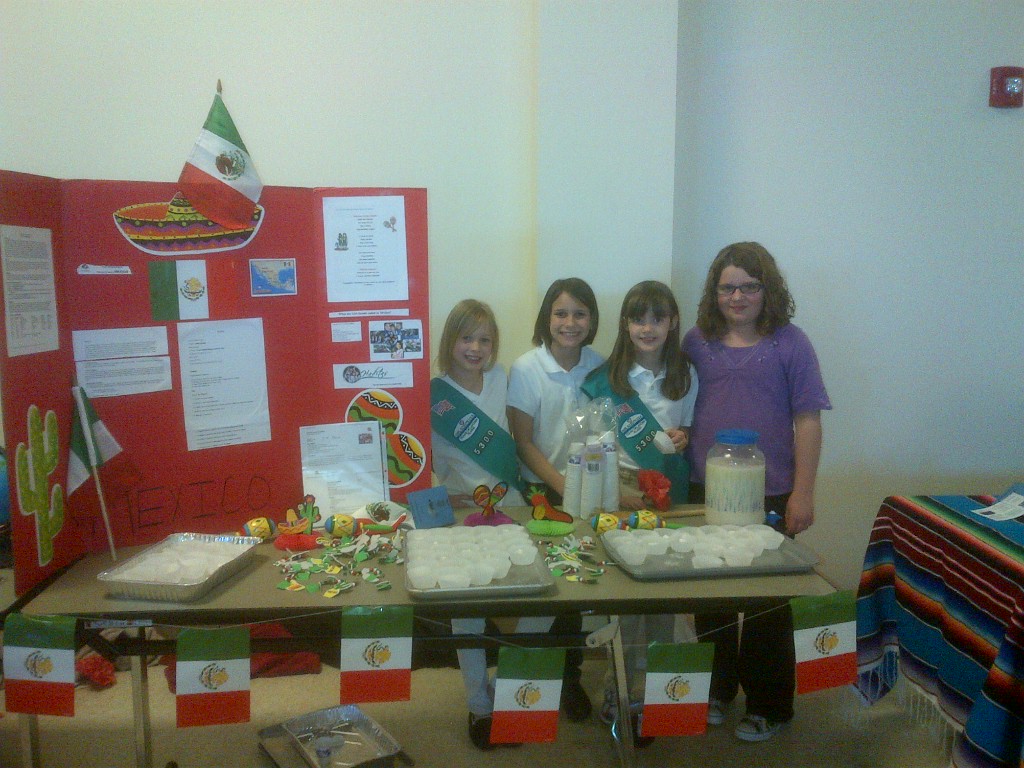 This year my girls chose Mexico. We picked a food and drink recipe and made swaps. The food we chose was Mexican Wedding Cookies and the drink was Horchata. We had a poster with information on it about Mexico and about the fact that many babies are born to young mothers early and what healthy things pregnant moms should do to keep themselves and their unborn babies healthy.  Then they traveled the world and went to Scotland and heard a bag-piper. While in Scotland, they got to see that germs are everywhere and what it takes to thoroughly wash their hands making sure they got all the germs off!   Then it was off to Iceland to  have stew. They also went to Venezuela and bought some petri dishes to raise money for the World Thinking Day Fund, and the went to England to have scones!  When we stopped in Puerto Rico, which is actually a United States of America Territory, they learned about the wonderful food and that the avocados are as big as their heads, but they also learned that there are many babies that are born way too early and that the March of Dimes raises money to help these babies have a chance at life! Oh and we got to bring some mangos home from India, its their National Fruit!  We visited several other countries but these are the ones that made an impact with my girls and so they remembered them.

Our Cabana in Mexico 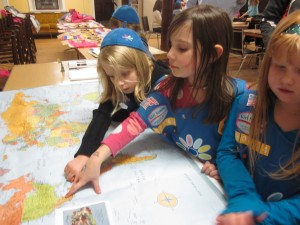 My Daisy Troop chose to learn about one of the WAGGGS Centre locations, Our Cabana in Mexico, during our WTD Fun Night! 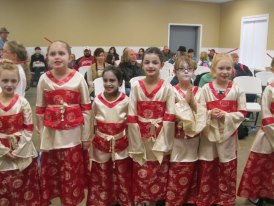 Today our Service Unit held a World Thinking Day event at a local fire hall. Fourteen Brownies from our troop 80-020 represented Japan. They all had matching Japanese outfits, hair done up and makeup on. We decorated our booth with Origami butterflies the girls made, as well as a tri-fold with facts about Japan and other oriental decorations.

The girls participated in making the tofu dip we served at the event, and also helped make our Japan SWAPs. In addition, they each made and decorated two fans out of coffee filters. I found a site online where I was able to pull up the Japanese spelling of each girl’s name so she could write her name in Japanese on her fan.

For the skit at the end of the program, each girl from our troop told an interesting fact about Japan, and then we played the traditional Japanese song Sakura Sakura and the girls did a Japanese fan dance with their coffee filter fans. We practiced and practiced, and it turned out pretty good! 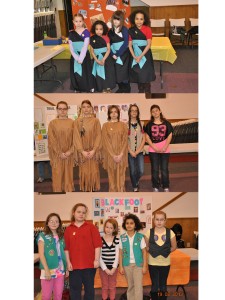 This year our Service Unit Thinking Day Committee changed up Thinking Day.  Instead of doing different countries like in years past we concentrated on America.  Our theme was “Native Americans”.  Each troop who wanted to participate picked a tribe and did their tri-fold and things on that tribe.  Our Troop, Troop 605 is multi level and each of the 3 levels wanted to do their own troop.  Our Daisy/Brownie level did the Hopi, the Junior level did Blackfoot and the Cadette level did Cherokee.  We had crafts and games and food and legends for the girls to learn about.  Some of the girls in the SU weren’t sure about this idea at first but ended up enjoying it and learning something new. 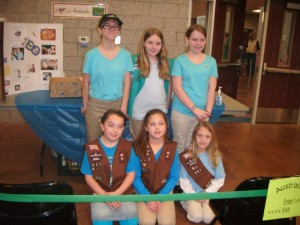 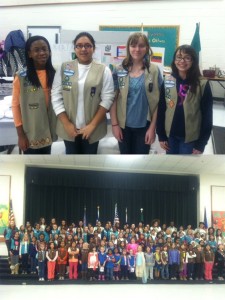 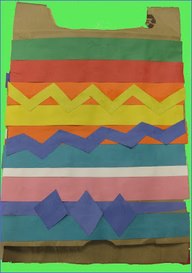 Our Daisy troop just wrapped up our WTD Fun Night, or should I say ¡Fiesta! Of the 4 WAGGGS World Centres, the girls chose Our Cabaña. What a great start! Thanks to one of our moms who is a Spanish Teacher, we learned some things about the country, culture & flag of Mexico, made paper-bag serapes, shared a traditional snack, played a new game, learned some spanish words, and learned about Las Guias: Girasoles & Haditas. 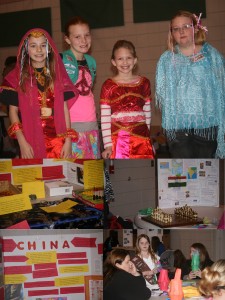 Our Service Unit had their International Fair today.  Not sure if our entry is in time for the discount or not, but wanted to submit them anyway.  We are a small Service Unit of only 5 troops and a couple Juliettes.  We had 4 tables set up.  Hope you enjoy our pictures.  Each picture has discription of what troop and country represented. Will let you decide if you use all or just a few.