Donna would like your input: I have a newly formed brownie troop of 10 girls, we have taken two fun field trips, first one to a farm, second one to a museum. Only half the troop showed up to each trip. Should I allow the ones that didn’t show up earn the fun patch as well? If their parents make up the trip by themselves? Thank you. 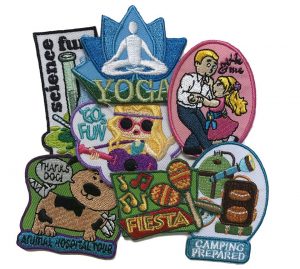 Lori suggestion: In general, our troop pays for the fun patches only if the girl participates with the troop. If the parents take the girls to the event/activity separately, then the parents can pay for the patch. However, I have made some exceptions on a case by case basis – for example, a local archaeological site has a ‘Scout Day’ once a year. I encourage the girls to go with their families because of the nature of the event. So the troop will pay for the patches if they can show me their entrance ticket (proof that they went). But we recently did a volunteer day at a local horse rescue; only the girls that went with the troop got the patch.

Gemela: When girls look back on their vests when they are older, they should be able to have a memory or story about everything that is on there. Pointless to have patches for events they didn’t attend. I always remind my girls (and parents) that we aren’t having a contest to see who has the most patches! Fun patches represent GS experiences.

Rebecca wrote in: Fun patches are just for girls who had fun at the event! I have Seniors now and learned long ago- you will rarely get all or even most girls to an event(especially in Middle School) Last year we went on the big Unit Camp Out- there were only two girls & they loved it!

Danielle: No for fun patches. Yes for G.S. official badges. Fun patches are for the girls who show up to the group event in my opinion. However, if the event if for a G.S. related badge, I would give them the opportunity to make it up (but they still wouldn’t get the fun patch).