Fun ways to Celebrate Juliette Low’s Birthday with Your Scouts

It’s the spookiest time of year, which gives us several activity options. Before having a Halloween party, we sing “Happy Birthday” to Juliette Low to remind our Girl Scouts that October 31st isn’t just Halloween. Last October, we decided to celebrate not only Juliette Low’s birthday but also the first born baby in our town on that day.

It is not only Juliette Low’s Birthday on October 31st

We collected baby supplies and made several gift baskets. We also included a daisy journey book and a cute outfit that said future Daisy Girl Scout. We contacted our local hospital and asked if we could donate a basket to the first baby girl born on October 31st.  We ended up with two large baskets and 3 bags full of baby supplies to donate!

After the mom and baby came home from the hospital, we made arrangements to take all the baby baskets to their home. The mom was so excited and the girls felt great getting to help a single mom with two other children.

Our party isn’t just a celebration for Juliette—sometimes, we celebrate the birthdays of everyone in our troop! We place several small gifts on a table with a numbered container in front of each gift. As the girls played games, we awarded them two tickets for winning, and one to the others for participating. The girls write their name on each ticket and put it in the container in front of the gift she would like to win. At end of our party, we draw a ticket for the winners! Since we have a large group with many leaders, we always have a table with a few things for leaders to win. They do a lot of work, and feel they deserve a chance for gifts too.

During our party, we play games. One game is the “Wright Troop Celebrates Juliette Low’s Birthday”:  Each girl starts with a trinket or a piece of candy. I read out loud the story below. When the words WRIGHT or RIGHT are read, the girls pass the trinket or piece of candy to the girl on their right. When the word LEFT is read, girls pass to the left. I pause a moment after each of these words giving time for passing. I always say the word a little louder so the girls pick up on it. At the end of the game, the girls get to keep the item they have in their hands. I also have a couple funny items to pass as well.

This story went right along with the theme for collecting baby items for first girl born on Juliette Low’s birthday. 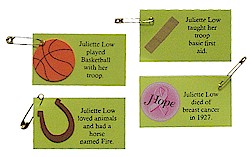 With our younger Girl Scouts, the Daisys and Brownies, we play Juliette Says. It’s the same as Simon Says. Our Juniors will often jump in and play to.

Since we celebrate everyone’s birthday, each girl and leader get a cupcake with a candle. We sing happy birthday to everyone and Juliette Low. For safety, the young ones sit at a table when we light their candles. The older girls light their candles off of each other, remembering not to tip the lit candles.

Ideas to help your girls learn about Juliette Gordon Low can be found at MakingFriends®.com