Fun Ways for Daisies to Bridge to Brownies 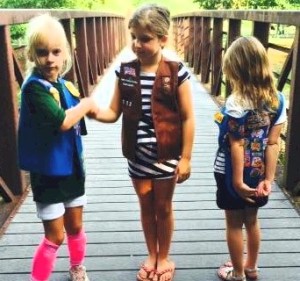 Leader question: Any ideas on how to make bridging from Daisy’s to Brownie’s fun and creative?

Our Facebook scout Leaders had some really creative ideas for our readers to try at their next bridging celebration!

Valerie wrote: For my troop’s first set of bridging Daisies, I had each Daisy fill in a foam craft flower. They wrote one fun thing that they did or learned during Daisies on each petal which we used as aisle markers by tacking them into the grass with tacks on top of pencils.

Teresa’s troop also had an outdoor ceremony: We bridged outdoors over a stream. I gave each girl a daisy and as they crossed the bridge one at a time, they stopped in the middle, made a wish for her Brownie years, kissed the daisy goodbye and tossed it into the stream and watched their Daisy years float away. There wasn’t a dry eye in the house and those pictures of the girls are still my favorite!

Brenda shared: So cute!! My girls will be bridging this summer in Paris over Pont Alexander in front of the Eiffel Tower!! When they were Brownies – that was their goal for high school… and 2 of the 22 stayed in and made it.

Sandi’s idea: Each girl can carry streamers across the bridge using colors from the petals (so-and-so represents honesty because… ). Tie on one end, cross bridge and tie on other end to create the “rainbow”.

Lynn’s troop used a different ceremony: My Daisies went thru a large cardboard “oven” and came out as brownies!

Doria’s help: Cross a bridge and have them meet at the Brownie pond and teach them ‘twist me and turn me’ as a new group of brownies

Marlene added: We had our girls add a petal that coordinated with color and promise to a big Daisy. They removed their smocks, crossed the bridge stopping in the middle to say the “twist me turn me” rhyme. Then got their Brownie vest on the other side. We also celebrated with personalized chocolate brownies after the ceremony. 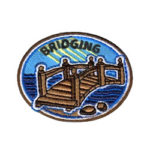 Of course your girls will want a bridging fun patch to remember their celebration. 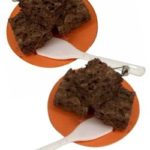 After they become Brownies your our Brownie with Spatula SWAPs will be fun for your girls to trade at their next big event.