We have a large multi-level Girl Scout troop of Brownies and Daisies. Last spring we decided to do something totally crazy,  invite Dads to go camping with us! This was something one of my co-leaders had done when she was growing up in Girl Scouts and she really wanted to do it with our Girl Scout troop too. I have to admit, I was nervous!

The questions were bouncing around in my brain: Dads camping with us? How would this work? Would they even want to go?

We decided the first thing we should do is invite the Dads to a regular Girl Scout troop meeting. That way we could meet them, they could meet us, and Dads who couldn’t go camping would get a chance to spend time with their Girl Scout too. We scheduled a meeting and invited all Dads to join us. We also let them know that “Dad Representatives” such as Step-Dads, Granddads, and Uncles were welcome to come if Dad could not. We started the meeting with an ice breaker game. Being silly is a big part of camping in our Girl Scout troop and we wanted to make sure the Dads understood that going in. 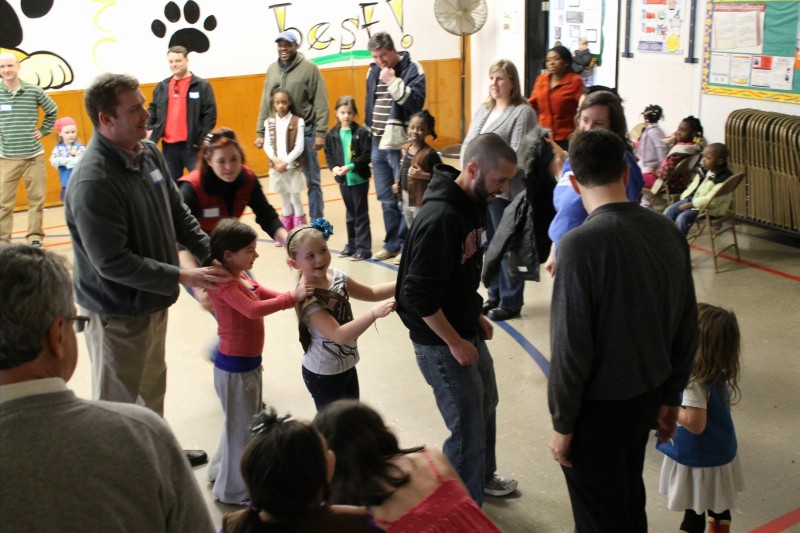 The game we played is a name game and it starts with everyone in a circle. One person is the engine of the train (we had a leader take this role) and they approach someone in the circle and say “Choo-Choo Choo-Choo Train, my name’s __________ what’s your name?” That person says their name, and the train engine repeats the name five times like an engine warming up and ends with a loud “Choo-Choo!” The person then joins the train line behind the engine, conga line style and they chug along to another person in the circle to repeat the process. As the train grows the whole train repeats the new name and shouts “Choo-Choo!” as new people are added. Since we had such a large group we got three trains going which made for a lot of “choo-choo’s” and a lot of laughter as the trains crossed paths!

Next we had the girls color water bottles for the camping trip, a craft we thought the Dads wouldn’t be too scared of trying. Then for a snack we built snack campfires. If you’ve never made this snack before it’s a great way to teach a Girl Scout fire building and fire safety.

You start with small marshmallows to represent rocks and arrange them into your fire circle. Then you give the girls a small cup of juice or water to represent their water bucket next to the fire. Large bread sticks or pretzel rods represent your fuel, pretzel sticks represent kindling, and shredded coconut stands in for tinder. You can also use m&ms or raisins as fire starters and we like to have candy corn to represent the flames catching so we know when to add fuel.

While everyone was eating their snack we went over some logistics with our troop Dads: when to meet, what to pack, and what to expect. By this time the Dads were a lot more relaxed and they all seemed pretty excited for our trip. We had them complete permission slips for their Girl Scouts and brief information sheets about themselves for us. These information sheets just asked for the Dad’s name, Girl Scout’s name, his relationship to the Girl Scout (for any “Dad Representatives”), his contact information, and a place for him to list any allergy or health concerns we should know about him. We told them we only had two firm rules: #1. Be Silly! If you aren’t having fun, your Scout won’t have fun either; and #2. Do not enter the other gender’s bathroom no matter what! No girls in the men’s bathroom, and no men in the girls’ bathroom under any circumstances. Always find a troop leader if you suspect there is trouble in a bathroom. This is for everyone’s safety and part of Girl Scout’s safety guidelines so we wanted to be sure everyone understood this was a very serious rule. The Dads seemed to appreciate this rule as it protects them as well as their girls.

Time for The Camping Trip

A few short weeks later it was time for our trip. We had a great turn out with 22 Girl Scouts, 17 Dads, and 5 Leaders ready for a adventure! Our first order of business once we arrived at camp was, of course, to unload cars and make Kaper assignments. Then we ate a quick sack lunch so we could get started with the fun stuff!

The Dads seemed a little intimidated now that we were actually at camp, so we decided to loosen them up again with a few more games. We played the Screaming Game first to get the remaining car ride wiggles out.

The Screaming Game is very simple, one at a time the girls start running and screaming. When they run out of their first breath of screaming they stop. Whoever goes furthest wins! We let the girls go first, followed by the Dads, and then we did a round where Dads and daughters ran together. We were surprised to see Dads picking up and carrying their girls to run further before their scream ran out! 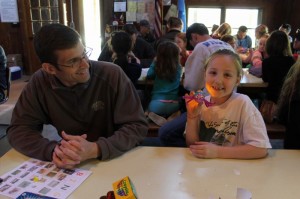 We played a couple more silly games before we started in on badge work. The Brownies worked on tir Bug Badge In A Bag® while the Daisies worked on their Friendly & Helpful petal, which partly involved helping the Brownies with the Bug Badge. The Dads had a great time helping the girls make lightning bug crafts and going on a bug hunt!

Once we finished our badge and petal work it was time to hike. We had the girls make snack necklaces for the hike by stringing fruit loops, pretzels, and other “o” shaped foods onto a piece of yarn they could wear around their neck. Unfortunately, we were misinformed on which trail to take and wound up on the three mile trail instead of the one mile trail we intended to take. We realized our mistake about one mile in and were able to turn around and come back instead of completing the whole three miles. But our poor Daisies were definitely tired by the time we got back to the cabin!

Since our hike was twice the length we intended, it was time to start preparing dinner as soon as we got back to the cabin. The Dads were shocked when we told them that they’re only job was to sit by the fire circle while the girls did all the prep work. Once we explained that fire building and cooking skills were part of the purpose of camping they seemed to understand and even helped keep the girls busy with games when their kaper groups finished their jobs.

After everyone cooked their hot dogs over the fire and had eaten their meals the Dads started cleaning the dishes on their own. Our plan had been to have the girls do it. But, we were so tired by then that we decided to just let them do it. We really appreciated their help and I think it made them feel like they contributed.

Finally it was time for my favorite part of camping: s ‘mores and songs around the campfire. We sang “Make New Friends” in a round, “Once a Girl Scout Went to Camp,” “Boom Chicka Boom,” “Linger,” and many more. The Dads didn’t know most of the songs but they seemed to really enjoy listening to their girls sing them and watching them be silly with their friends. It was a great way to end the evening.

At bed time we had the girls sleep upstairs in the loft and the Dads sleep down stairs in order to comply with the separate sleeping area requirements. One of the female leaders slept at the bottom of the stairs for that added layer of security. What we didn’t take into account during planning was the snoring by the Dads. Next time we will be bringing ear plugs as none of the female leaders got much sleep because we had some serious snorers among our Dads!

Omelets in a Bag 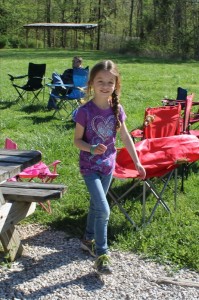 In the morning we made omelets in a bag in a pot over the fire for breakfast. You take freezer bags and put eggs with any omelet add ins you want into the bag and squish it until everything is well mixed. Then you put the bag in boiling water and let it cook for about 5-10 minutes. The Dads seemed skeptical of this idea, but it worked out great. We had diced ham and diced peppers they could add to their eggs as well as muffins and fruit to round out the meal. Even the girls who didn’t like eggs enjoyed cooking eggs for their Dad this way.

After we cleaned up from breakfast we had them paint frames for a picture to remember the trip. We purchased blank wooden frames from an online vendor and had pre-painted them a light blue. They stamped the word “Dad” onto wooden circles which they glued to the bottom part of the frame. As the girls were working on their frames I took them outside one couple at a time to get a nice picture of them with their Dad to go in the frame. The weather was beautiful so it made for some beautiful pictures.

Once we cleaned up the craft we had everyone load things into cars so we could more easily clean the cabin after lunch. The Dads then took the girls to the field to play some games while the leaders prepared grilled cheese, peanut butter and jelly, tomato soup, and left over’s from the other meals. Everyone was pretty tired by this point so, after lunch and after the Kaper groups completed all their cabin cleaning chores, we sat down at the fire circle to recap the trip. We had everyone say one thing they enjoyed or learned on the trip and one thing they would change next time. Of course, most people said next time we should take the right hiking trail, but overall everyone glowed about how great the trip had been. The Dads all talked about how much it had meant to them to share this with their daughter and how amazed they were by how much the girls could accomplish.

The trip I had been nervous about taking wound up being the best camping trip we’ve taken to date. We all had such a great time that we’ve decided to make it an annual troop event. We even had a couple Dads request a fall Father-Daughter get together too so they don’t have to wait a full year! I really encourage every troop leader to consider a Father-Daughter camping trip.

My name is Katie Faris and this year is my fourth year as a Girl Scout troop leader. In that time our troop has grown from 9 Daisies our first year, to 21 Brownies and 15 Daisies this year. I work with an awesome leadership team with five wonderful co-leaders. Being a troop leader led me to the realization that my calling is to go into education and I am now pursuing a degree in Elementary Education. So it’s no exaggeration when I say Girl Scouting changed my life!
Pin
Share
Tweet