Over the last 23 years of scouting my troop has used the Wizard of Oz theme for many different events, day camp, parties and a GS ceremony.  I highly recommend this theme the girls have always enjoyed it and there 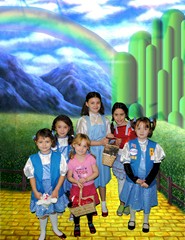 are so many ways you can use it to teach scout skills, a great example is fire building. The way we incorporated the theme is to teach fire safety and explain we have to be careful because remember scarecrows will burn. We built a edible fire and the girls had to make sure the fire was built right before they were allowed to eat it.  We also asked review questions as we went around checking fires to see if they understood what we taught them. There are a variety of snack items you can use for this, below is the items we used on ours and directions for activity.

Now the best part we let them eat it.

We had the girls come dressed in their favorite Wizard of Oz character.  We had two of our Ambassador girls and 3 leaders come dressed

as Dorothy, Glenda, Cowardly Lion, Tin Man, Scare Crow. Instead of doing the best costume, or scariest we purchased gifts and picked the winners by the number of girls dressed like that character. It also was a great photo opportunity, we took the pictures on a solid background and later I used Photoshop and put everyone onto the yellow brick road and gave everyone pictures at the following meeting. It was a close contest between the witches and scarecrows, but the witches outnumbered the scarecrows. We also had girls come as Dorothy, Toto, munchkins, Tin Man, and cowardly lion. We also gave award for being the only character and the winner of that one was Uncle Henry, Auntie Em’s husband. 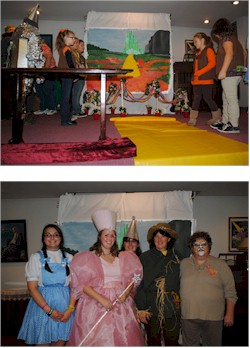 We had a GS ceremony a couple weeks after the Wizard of Oz party; the two girls that were Ambassadors, Dorothy and Glenda at the party ran the whole program.  One of the other troop leaders is a great artist so she drew Emerald City on a large mural and she took a roll of yellow plastic and drew bricks on it.   We rolled out the yellow brick road and the girls walked down the road to get to Oz. escorted by Dorothy, the bridging girl had to walk across a bridge to get to Emerald City. The leader of the group was Oz so they did the pinning; the brownies that bridge went to the pond in emerald city.  The girls each received a bridging certificate just like the scarecrow received and a basket that contained a heart sticker (Tin Man Heart), dog bone candy (Toto), a metal with their awards pinned on it (Lion Courage).

Snack for Troop Meeting or Ceremony

Yellow Brick Road Relay
Before the party, we prepared 4 pieces of yellow poster board cut into 8 x 11.5”. We divided the girls into two teams; the first person in each line was given two bricks.  These bricks are the only thing they could step on to travel from the start to finish line, around an orange cone and back. They had to put one brick on the ground and step on it, then place second brick on and step on it, not too far in front of them because they had to reach the first brick to continue the pattern clear across the floor around cone and back to finish line to pass the brick to the next player in line. They always had to have their feet on a brick as they went across the floor. Relay continues until all team members had gone. The team that finished first won. 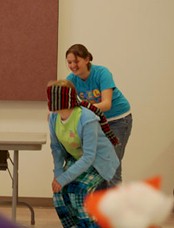 Courage Walk
Lion had to find courage so we had the girls experience the same; we did this for our older girls.  It was called a trust walk we paired the girls up and blindfolded one of them and then set up a obstacle course, we set chairs around and a mat on the floor, a table they needed to climb under, over and around the different obstacles.  The girls were not allowed to see the course before hand.  One girl was the “sighted” buddy and had to tell the blindfolded buddy to go forward, step up, go to left or right, get down and crawl, the sighted person held onto the arm of the blindfolded girl, for safety not to direct their unsighted partner.  Only way the sighted person could direct was by talking, they were not allowed to pull the partner through the course.  We did not make this a race for safety reasons, we just wanted to show what trust really was.

Wizard of Oz Broom Race
We formed two teams and let them race through a course on brooms. The first team to finish first won.

Word Game
We have played how many words you can create out of FOLLOW THE YELLOWBRICK ROAD. 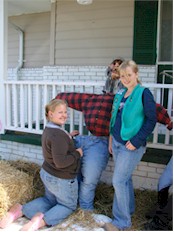 Scarecrow Relay
The Scarecrow has fallen apart and you must put him together again.
Need:  Cut outs of head, pants, shirt, shoes, hat, etc.
We hid all the pieces then paired the girls up, each team was given a poster board, the girls had to take turns looking for parts after each fine the girl ran back to give other partner the piece to glue onto poster board then once that had been completed the other girl took her turn to look for part this continued until scarecrow was complete, the first team that completed won.
Straw could be added to make it a little harder.  Give each team a small amount of straw to give the scarecrow at more real look.

We let each girl pick a brown bag, I had put different items in each bag, I had put tin foil and a heart and straw plus some stuff that I new the girls would have no idea what it was for, so it made it that much more fun. They had to use every item in bag and create a skit we put a 5-minute limit on each skit.   We gave them each a half hour to put the skit together then to preform.

We had girls bring old clothes, hats, shoe etc. to make scarecrows, we had got some straw donated and we had a contest, which girls could make the best scarecrow then we donated the scarecrows to the area zoo, they have zoo boo so they needed donations. We gave a prize for the best scarecrow.