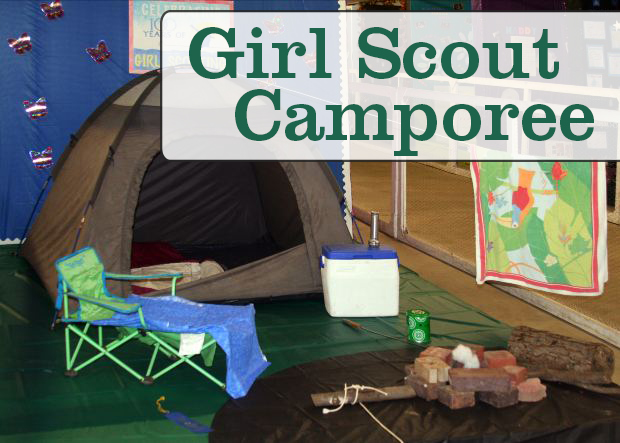 Hello Ladies, I am thinking about next year’s Service Unit Camporee and was looking for some theme suggestions. What was the best camporee you’ve been to? I appreciate your suggestions. Have a great day.

Answers From Other Girl Scout Leaders Compiled from our Facebook Page:

“Girls rock with handmade painted pet rocks and made homemade lip gloss, painted nails. Made play dough. Another one we did was a birthday party where each troop baked in their box oven and the girls decorated for a contest. They made paper bag scrap books with their troop pic in it. (Took memory card to Walmart on lunch and had them printed. ) another is “never grow up” tinker bell theme. Made tinker bell wings, watches the movie, played games, did a scavenger hunt and made ice cream in a can.” Stacey
“We participated in Dabbling Through Fairytales. Between “Once Upon a Time” and “Happily Ever After ” is a story only you can write. All crafts related to Fairytales. Highlight of camp was the two climbing walls (Rapunzel or Jack’s beanstalk). Even the Daisies got to climb.” Elizabeth
“We hosted “Surviving the Zombie Apocalypse” which was all about disaster preparedness. The most popular station was two policemen teaching self-defense. (One of them played the zombie with great enthusiasm!)” Robin
“We did a survivor weekend…not down and dirty, just lots of fun stuff, with some GS must know stuff mixed in. Loads of fun for mixed age groups.” Cheryl
“we did one last year that was mystery themed. Basically, there was a “car crash” scene (just a car “crashed” into a tree, Daisy-appropriate!) The girls had to investigate that scene, and another elsewhere, to find clues to what happened. There were stations for tire track analysis, fiber analysis, blood spatter (that was just older girls- went wth the Cadette secret agent badge), GPS. Lots of fun hands on skills that went with a common theme of the “mystery”. I was a slightly wacky detective who roamed the whole thing giving my “observations” (sometimes misleading, sometimes no…) At our Saturday night closing event, the whole story was revealed.” Michelle
“Settler Days…girls learned to groom & ride horse, made ice cream rolling in a coffee can, made rag dolls of muslin, local guy came and roasted a pig, canoeing, archery and topped the night off with Jazzersize in the field lite up at night…awesome fun” Sharon
“We hosted a 3 night twilight camp where the theme was earth, wind, fire, &water. The girls had a blast . All of the stations taught something about the theme. Each evening we had a different activity supporting themes.” Kathy
“We had a bubble blowing station that even the adults had a blast at. ” Mary
” We done a story weekend where each troop had to pick a book and their swaps, t-shirts etc were that theme. We done under the sea, circus, girl scouts the olympics. ” Arnetta

For additional ideas for your next Camporee, take a look at the Camping and Hiking page at MakingFriends.com