Silver Award – Giving back to the Community

Today’s post comes from a Cadette Girl Scout leader from Troop 1563 in Manchester, Md.  One of her girls, who is also her daughter, earned her Silver Award in September of this year. She held a clothing giveaway after finishing the Amaze Journey.

Jeannie sought clothing donations from church family, the public, as well as at her school. They washed them up, sorted them and stored them until the day of her giveaway. Jeanie sought family-friendly door prize donations from area merchants. She was able to get several donations including roller skating admissions, movie theatre admissions, a restaurant gift certificate and a grocery store gift card. With additional donations from an area grocery stores she was also able to offer free lunch at her clothing giveaway. They were able to offer hot dogs, macaroni & cheese, and assorted sweets in addition to soft drinks.

The day of her giveaway, September 22, 2012, folks from the community were invited to come to their church and help themselves to the free clothes in the Fellowship Hall. Housewares, toys and other items were also laid out on tables for people to pick up. The guests could start with three large trash bags, plus they could fill boxes as well. Fifty to sixty people attended that day. It was a very successful event.

We hope this inspires another Girl Scout Cadette who may be wondering what to do for a service project or a Silver Award project. 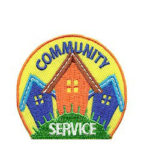 A Community Service fun patch is a great addition to every Girl Scout vest.