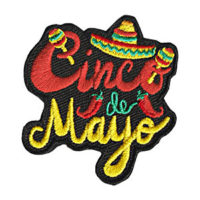 This 2″ iron-on embroidered patch is part of our patch program®.

Suggestions for how scouts can earn the Cinco de Mayo patch from Home:

Cinco de Mayo originated in Mexico but is more popularly celebrated in the United States. The day does not celebrate Mexican independence but is a remembrance of a battle that took place in the Franco-Mexican war on May 5, 1862. On this date 2,000 Mexicans held off 6,000 French that attacked the small town of Puebla de Los Angeles. This symbolic victory for Mexico helped the Mexican resistance gain momentum.

Cinco de Mayo, also called the Battle of Peubla, is not a federal holiday in Mexico and is mostly celebrated only in the state of Peubla although a few other parts of the country celebrate as well Banks, businesses and offices remain open. The areas in Mexico that do celebrate have parades, re-enactments and other festive events.

Have some fun during a virtual Cinco de Mayo celebration:

Challenge your scouts to come up with a fun craft or activity they can do with supplies they already have at home. If your girls have tissue paper they can make a fun giant flower craft. A paper grocery bag and some paint or markers is all they need to make a serape. Another idea is to look up traditional Mexican dances on-line and have fun during a virtual Cinco de Mayo celebration learning the dance.

You can find fun crafts for Cinco de Mayo on our page Easter, Mother’s Day and Spring Ideas for Scouts.