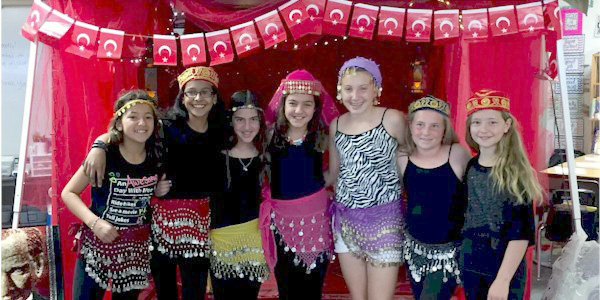 Troop 1732, Hosted the Country Turkey. The girls made & decorated the tent themselves!

In most countries of this area, daily life is strongly influenced by Islamic religion. MakingFriends®.com has ideas and products to help make your celebration a success.

For countries, such as Israel, where the culture is influenced by Judaism, girls might like to see our page Jewish Holidays and Crafts to learn a little about Jewish holidays and see some craft ideas to enhance their display.

Depending on which country girls choose, costumes for the Middle East may include various types of  thawb- loose, long-sleeved, ankle-length garments; abaya- large, black cloak worn over other clothes; and, hijab-headscarf with or without a niqab- veil that covers the face.

Middle Eastern cuisine also varies from one country to another but some commonly used ingredients include olives and olive oil, pitas, honey, sesame seeds, dates, sumac, chickpeas, mint and parsley. For a Thinking Day snack, girls might taste popular dishes such as kibbeh and shawarma.

Learning to pronounce a few key phrases in Arabic is another appropriate activity for girls who choose a country in this region. Arabic is by far the most common language in the Middle East, but about 20 minority languages are also spoken there.

This region generally has a hot, arid climate, with agriculture in limited areas. Of greater interest to the world at large, are the vast oil reserves that have been found in most of the Middle Eastern countries that border the Persian Gulf. This valuable resource helps make the Middle East a key economic and political power around the world.

See our Thinking Day* pages for:

Check out crafts, Swapping pin ideas and Trading Cards for: