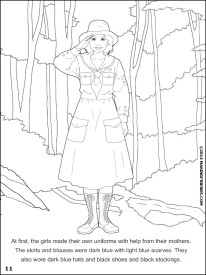 New girls and troops celebrating Founder’s Day or GS Birthday will want to learn about Juliette Gordon Low, the founder of GS in the United States of America.

There are two official GS holidays that celebrate Juliette Gordon Low and the founding of GS in the USA:

Juliette Magill Kinzie Gordon was born on October 31, 1860 in Savannah, Georgia. She was the second of six children. She was nicknamed Daisy by an uncle and was called Daisy by friends and family throughout her life.

As a child from a privileged family, Juliette Low was able to attend elite schools and attended boarding schools in Virginia and New Jersey. She went to finishing school in New York City. Her family believed their privilege also came with a responsibility to give back to the community and country.

Juliette was very talented. As a young girl she wrote plays which she would convince others to perform for family and friends. She also wrote poems and sketched. She later became a skilled painter and sculptor.

Juliette loved the outdoors. Girls of her time were taught to be “lady-like” but as a young girl Juliette preferred to run, play, climb trees and she loved to stand on her head. As a teenager she was very athletic and became captain of her rowing team. She was a strong swimmer, learned how to canoe and was also a tennis player. At finishing school, her liveliness would get her in trouble for not acting like a lady.

She also loved animals having many pets throughout her life including, dogs, exotic birds and a horse named Fire. She often rescued and took care of sick animals.

As a teenager Juliette formed her first organization, Helping Hands, and although she was not a good seamstress, she made clothing for the poor.

After finishing school Juliette traveled all over the United States and Europe. She had many friends and loved parties. She liked to wear nice clothing and even sketched designs for some of her own clothing.

As a child Juliette had many ear infections and had lost most of her hearing in one ear. At her wedding the guests threw rice for good luck and one grain got stuck in her good ear causing her to permanently loose hearing in that ear. She was almost completely deaf but she did not let her disability prevent her from accomplishing her goals.

Juliette married William Mackay Low in 1886. They had homes in Georgia and in England with Juliette traveling back and forth often. They had no children. Their marriage was not a happy one and was ending at the time of her husband’s death.

After the death of her husband in 1905 she searched for meaning in her life. She turned to art, including sculpture and iron-work, adventure and travel to far away places like Egypt and India. She returned to London in 1911 and met Sir Robert Baden-Powell who founded Boy Scouts in England a few years earlier. He told her about his problem. Thousands of girls were trying to join Boy Scouts. They showed up at a rally with home made uniforms and signed in with their initials. He wanted there to be a group for girls but he needed help to run it. By this time Girl Guide troops had started forming in Australia, Canada, Denmark, Finland, New Zealand, South Africa and the United Kingdom.

Her meeting with Sir Robert Baden-Powell inspired Juliette to start her own Girl Guide troops in Scotland and England.

Returning to Savannah, Georgia in 1912 Juliette founded the GS movement in America. Juliette gathered girls who she thought would enjoy being together for crafts, sports, the outdoors, community service and having fun. She broke social convention of the time by including girls from any class, ethnicity or culture and girls with disabilities.

On March 12, 1912 Juliette registered 18 girls as the first American Girl Guides. The name would change a year later. Troop meetings with Juliette must have been fun with Juliette telling scary ghost stories around the camp fire and standing on her head at meetings. She encouraged the girls to be independent and challenged them to try new things. She wanted them to develop their talents and skills, including leadership. She asked them about their thoughts and what they wanted to do instead of telling them what they should do. Troops were girl led from the very beginning of GS. Girls learned new skills like first aid, cooking, knitting, reading maps and tying knots. They played basketball, went fishing and camping, did archery and many more activities thought of at the time as “boy activities”. The first uniforms were made by the girls with the help of their mothers. The skirts and blouses were dark blue with light blue scarves. They also wore dark blue hats with black shoes and stockings.

Juliette used all of her money to start the GS movement. When she ran out of money to keep the organization going, she sold her pearl necklace.

Juliette died after a long and private battle with breast cancer on January 17, 1927 and was buried in her GS uniform.

Fun Fact: Juliette Low was a very young child during the American Civil War which took place from 1861 – 1865.