Service Unit 3 held our first Veteran’s Day event, Bring a Vet to Breakfast in 2016.  For our Service Unit, this was one of our easier events but clearly one with great impact. Scouts could bring as many vets as they wanted. Some girls didn’t know a vet to invite but they were still encouraged to attend. Could be family, friend or neighbor.  Girls get a patch of course. Of course they could also attend if they didn’t have a vet to invite.  (same price).  It should be noted that we did let everyone know that although we were using the term veteran, active military was also welcome.

After looking at the ideas on the Patriotic Ideas page at MakingFriends®.com, we ordered patriotic key chain kits  several months before the event.  Since the kit makes 120, we were confident we would have more than enough. We knew we could use any left-overs to hand out at the Memorial Day parade. We broke up the kit so 6 troops that volunteered could each make 20 keychains. 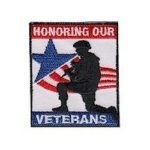 Preparing for Your Event:

Once we had our budget and counts set we ordered bagels and pastries from the place we use.  Once they found out what the event was for, they discounted our order. We recommend sharing what your event is about when shopping for community service. Of course there was also juice, coffee, tea and water

Having several troops make paper flowers out of red, white and blue napkins about a week or 2 in advance to decorate the tables along with decorations and flags from a party store dresses up the tables nicely.

We had prepared 4 songs and a few patriotic jokes and skits we found on-line.  We gave advanced copies of everything to the troop leaders in case they wanted to practice but we didn’t require it.

With the extra money after the food and decorations, we were able to get song books printed with color cover and back using clip art found on-line.  Instead of the modern GS logo, we used an old one with the eagle and red, white and blue also found on-line.  We only made 10 copies of the jokes, skits as there were only 10 parts needed.

The Day of Your Event:

As the adults checked in, the girls had a separate table to come to where they picked up one keychain for each veteran with them and folded enough song pamphlets for each person attending with them to bring to their table.  This is when we asked for volunteers for the jokes and gave them their part.

We started with the girls coming to the front of the room to lead everyone in the pledge, promise and National Anthem.

The adults were told the girls were going to serve the veterans but the hot drinks must be gotten by an adult.  The girls served their vets and got their own food to enjoy breakfast together.

When most people seemed done, we called up the girls again.  They performed patriotic songs with the jokes in between numbers.

Girls and guests were invited to take photos (we had gotten a big door flag as a backdrop and we also had a red, white and blue wreath they could have in the photo).

We had scheduled our event for 2 hours.  Turned out 1 ½ hours would have been more than enough time.

Why We Recommend This Event:

The impact was priceless.  Many of the veterans thanked us for a wonderful event and one told us that in his 50 years as a veteran he had never personally been invited to anything.  When he got the call from the scout that invited him, he said it brought a tear to his eye.  Our team chose to do this event as a personal one, with the girls inviting vets in their own life.

We felt that many girls probably didn’t even know that they had people in their own life who were veterans.  It was important to us for the girls to realize a veteran can be young or old, a man or a woman and that they are people they know or see every day.

What we didn’t anticipate was the reaction of the veterans.  We knew our guests would enjoy it but the personal nature of this event made a big impact on the veterans who were invited and everyone left feeling wonderful that morning. 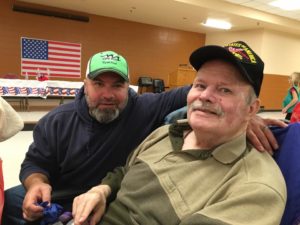 My name is Brittney Biehner. I became a volunteer in Service Unit 3 in Long Island, NY in 2016.  This was our first community service event as Daisy scouts. We look forward to participating in this new annual event again next year. Our Service Unit is very active and we look forward to participating in many other events during our first year.
Pin
Share
Tweet