The Girl Scouts of Troop 3574 voted to host a spay/neuter day in their hometown for the Bronze award. They made a plan to gather donations. Plans included talking to veterinarians and veterinary medication reps to get supplies. The scouts were also planning to ask vets to perform the surgery. The girls prepared lists, plans and funding sources. They even practiced asking people for help and where ready to roll.

Then they heard about a local family who was in great need. This family had their lives turned upside down overnight. Their 18 month old son McCall had been in a tragic accident and had been life flighted two states away. They had no idea how long they would be there, or what McCall’s prognosis was.

These 4 outstanding scouts dropped all of their plans and started planning a chili dinner fundraiser for the family. People in the community also started dropping off items for the girls to do something with to help raise money. One donor suggested a online auction. Some of the troop moms helped the girls set up an online silent auction.

Within 6 weeks these 4 girls had planned a dinner, shopped, cooked and hosted a community free will donation chili dinner. They also had collected donations and set up a online auction. The girls had created the page, took pictures of all the items and listed them with a starting bid. After that they asked the moms to take over closing the auction and handling the payments and shipping items to winning buyers.

McCall had been released from the hospital a few days before and while he could not attend the dinner, his family came to say thanks. The best part for all of us leaders and moms? McCall’s mom held her hand up in the Girl Scout sign and repeated the Promise and Law.  None of this crew had any idea we had helped a sister scout in a time of need. I can tell you that not a dry eye was to be found amongst the scouts and helpers.

When all was said and done this group of dedicated, awesome girls had earned a pretty substantial amount of money for this family. In an even cooler move the girls voted to not tell the public what they had earned. The girls felt the family was pretty quiet and was already overwhelmed by the support they had received.

Ready For Their Next Project

While doing the Bronze Award paperwork the girls realized they had put in over 50 hours on this project! They wanted to know if they could do another Bronze Project the next year! The girls dotted every i and crossed every t and mailed off the paperwork. The icing on the cake for them was when the project was approved, McCall’s mom came and handed out the awards to them! 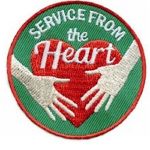 When your girls choose a project that means so much to them, the Service From The Heart Patch from MakingFriends®.com is the perfect addition to their vests!

Submitted by Holley Woosley Vennes: I am one gal in a team of 3 pretty wonderful leaders. We have 9 scouts and 3 leaders. Our troop is Brownie and Junior level. Catherine Hunt and I co-lead the Junior girls and Desiree Pope leads our Brownies. None of us three have ever been involved in Girl Scouts in anyway, so it has been a really fun adventure to take part in.